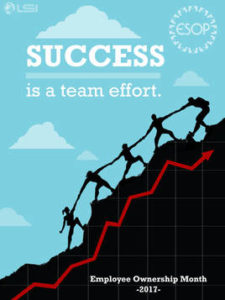 Since 2010, OPG has prided itself on its ESOP culture and how for the previous seven years it has been a part of every member of staff who passes through the doors to the company.  ESOP has not only transformed OPG as a business – with stock value consistently rising above each previous year – but the way in which staff are now no longer simply employees… they’re owners.

An unknown entity until 1974, ESOPs are now a considerable factor in the way more than 6,700 companies across the United States operate. With more than 14 million plan participants (roughly 130 of which at OPG), businesses across America are utilizing ESOP as a compelling employee benefits plan, looking after their workforce long into retirement and beyond.

Simply put, an ESOP company is partially owned by each member of staff who is 21 years of age, works at least 1,000 hours a year, and works at the company long enough to become vested. The more years you work, the higher your vesting level rises. And as the company’s stock valuation grows, so too does your wallet.

Craig White, OPG’s Chair of the Benefits Committee within ESOP, drives the processes we undertake as an ESOP, and has seen significant change in the company since the inception of the plan. “Culturally what’s happened is what was intended. We’re not just employees; we are the company. There’s a shift in thinking and behavior once you decide what being an owner means to you,” he explains.

Craig has worked at OPG for 16 years, being brought onto the leadership team by Gail Kahl (CEO) and Dan Kahl (CFO) seven years ago upon ESOP’s introduction. In that time, he has seen OPG go from strength to strength, with its share value rising from $8 to $29 a share. “The more plan participants we have, the better our company gets,” he says. “It’s really a game changer.”

Though the rules regulating ESOP and its distribution depend on a number of factors – most significantly being the level of an individual’s vesting – the underlying benefit is clear: “It’s free money. It’s your money.” Whether rolling it into a qualifying 401K, or taking a lump sum payment upon retirement (or before), an ESOP’s primary purpose is to help you live a better tomorrow.

While seeing OPG’s total stock value resting at $1.1 million is undeniably impressive, ESOP is more than just investing numbers – it’s investing in people. “We not only physically own the company, but there’s also an emotional piece when people realize they’re in it to win it. There’s a sense that I become the company – I am what OPG embodies,” Craig states.

Becoming a plan participant at OPG isn’t just about a pay check; it actively encourages both engagement and loyalty for a common cause amongst each fellow employee. Every role, every action, every minute that’s effectively utilized affects the bottom line – and your back pocket as a result. Due to ESOP, while working at OPG you’re not just building a future for yourself, but everyone else around you.

This sentiment goes hand-in-hand with the vision for OPG as a company. Michelle Steltz, Indiana Chapter President of ESOP, and OPG Benefits Committee member, understands the importance ESOP plays in the lifespan of the business, and individuals we support: “Because of ESOP, OPG could exist into eternity. Our continuity of supports is what drives our values, and fits into the spirit of what OPG is.”

ESOP is constantly evolving. National and regional conferences which take place each year, highlight ways in which companies, including OPG, can improve their service based on lessons learnt from both the good and the bad of fellow ESOP businesses. Networking develops key relationships and helps OPG’s Benefits Committee understand what it can do to better the lives of each plan participant.

Ultimately, OPG’s mission revolves around putting people first, and ESOP is a key element of that. As Craig says: “When Dan and Gail retire, people in the future won’t have a direct connection to them, but what they will have is gratitude because of what they did for the company and its employees with ESOP. Their history will live on through the ESOP and the people.”

Telling Our Story
Explore the company by reading our stories, and keep up-to-date with the important happenings affecting our OPG family today. From the latest updates in culture and events, to all the stories you need to see, OPG is here to keep you in the know.